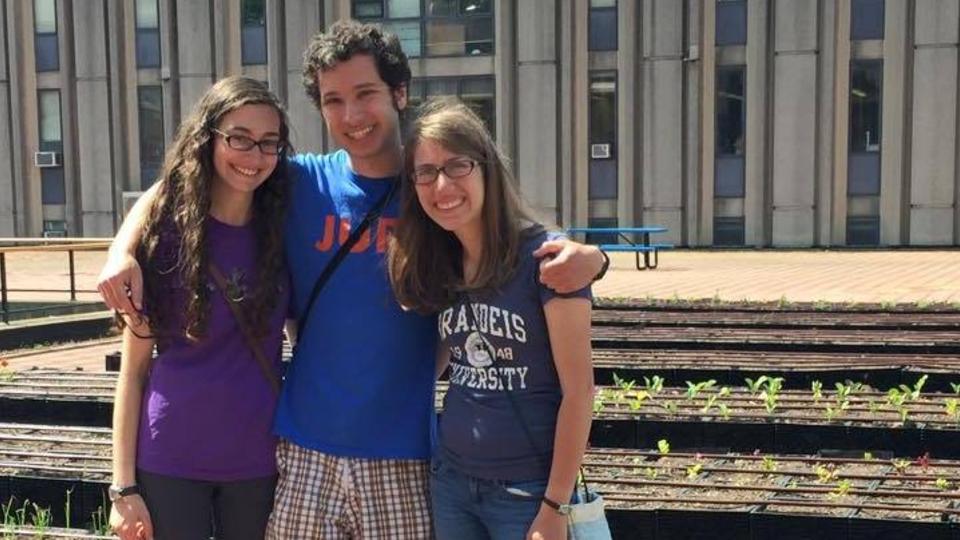 Brandeis University students are getting and teaching lessons in sustainability, urban agriculture, the local food movement and economics through a new 1,500-square-foot rooftop farm on their Waltham campus.

The students planted herbs, vegetables, strawberries and rhubarb in milk crates atop the Gerstenzang Science Center last month, tapping a $30,000 grant from the college’s Sustainability Fund.

“We had done some projects in class that were about food justice and redesigning urban space to become more sustainable and, from that, we came up with this idea,” said Annie Fortnow, a club cofounder and its off-campus coordinator.

The students hired Green City Growers, a Somerville company specializing in transforming unused spaced into urban farms, to help design the farm atop the science center, an area that also serves as a courtyard. They opted to plant in 1,500 milk crates — everything from eggplants, tomatoes and pickling cucumbers to catnip, bok choy and banana peppers — for movability.

“I also hope people begin to understand the importance of reconnecting with their food system,” she said. “We want to show people that it’s still possible to eat local food.”

Green City Growers will tend to the farm weekly, with the help of some student volunteers from Brandeis and its summer high school program, while most students are home for the summer.

The farm is expected to reap 3,500 pounds of produce per season. Bi-monthly farmers markets will start in the fall, so returning students can take advantage of the harvests. Meanwhile, a community-supported agriculture (CSA) program lets faculty and staff buy a $200 half-share or $400 full share and get weekly fresh produce. Students also can volunteer at the farm in exchange for produce.

“We also plan to contact local homeless shelters and food pantries … to donate some of the produce,” Fortnow said.

The milk crate farm is believed to be the first of its kind at a Boston-area university.

“It’s one of the largest rooftop farms in Greater Boston as well,” said Jessie Banhazl, founder and CEO of Green City Growers. “What’s unique about the project especially is that there’s an economic component to it. By having people buy into a CSA model for the summer months, it actually generates revenue and is able to sustain a lot of the ongoing maintenance and materials costs.”