[By Jon Mael | August 12, 2015]
WALTHAM — Students described it as one of the ugliest places on campus: a barren roof on a Brandeis University library, largely an afterthought amid the hustle and bustle of campus life.

But the creative thinking of an American studies class last fall has led to the transformation of the desolate spot into something else — a 2,000-square-foot garden that is a feast for the senses and a source of fresh food for the campus community and those in need. 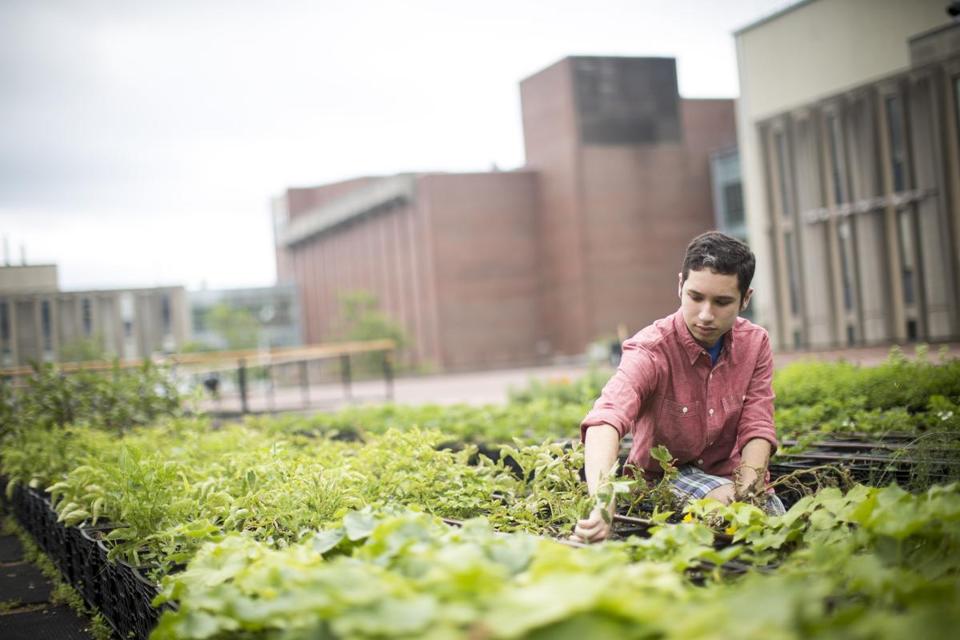 This summer, those plans have blossomed into deep-purple eggplants, bright-red tomatoes, and neon-yellow banana peppers. The scent of orange marigolds mingle in the afternoon breeze with the aromas emanating from the fresh mint and herbs.

“I came into the year knowing nothing about farming,” Jay Feinstein, president of the Brandeis Farmers Club, said as he gazed around the roof, arrayed with 1,500 milk crates that house the plants. “It was the class that got us into sustainable agriculture. This shows that anyone can start farming; we had no experience at all.”

After months of planning, a few obstacles that had to be overcome, and a $30,000 grant from a university sustainability fund, the garden was installed at the end of April.

The Brandeis Rooftop Community Farm, which sits atop the Leo Gerstenzang Science Library, grew out of a final assignment in professor Laura Goldin’s class, “Greening the Ivory Tower.” Goldin asked students to “design and implement environmentally sustainability projects that can improve sustainability on campus or the local Waltham community.”

Feinstein’s group decided to take the project one step further and form a club and build the urban agriculture project at Brandeis. There were some bumps in the road, however, such as the university nixing the club’s original roof choice because it lacked railings — which would’ve been costly to install — prompting student planners to move to their second option at Gerstenzang.

There was also the issue of who would tend to the farm over the summer. So the club found a partner in Green City Growers, a Somerville company that has built rooftop gardens for clients such as the Red Sox and B. good, a fast-food chain. The company harvests the produce, maintains the farm’s irrigation system, and holds agriculture education sessions for students and the community.

With Green City’s help, the farm has been very productive, and the Farmers Club is doing plenty with the bounty. There is a Community Supported Agriculture program in which people, the majority of whom are Brandeis faculty and staff, can purchase full ($400 per year) or half ($200) shares of produce, which they receive weekly.

The club will also hold weekly farmers markets on campus in the fall, and when the semester is back in session, a portion of the produce will be donated to organizations for those in need.

“A lot of low-income people in the community don’t have access to local food,” Feinstein said. “You can talk about local food all you want, but what does it matter if those in need can’t have it?”

Goldin, now in her 15th year at Brandeis, echoes her student’s sentiment about food justice, saying equal access to healthy food “should be a basic human right, just as access to clean air and water.” She also touted the other benefits of the farm, such as reducing carbon dioxide on campus and offering teaching opportunities for other courses.

“I’m deeply proud of this group, who brought this project to life with great creativity, determination, [and] plenty of hard work and heart,” she said.

Feinstein, a junior double-majoring in environmental studies and economics, said Brandeis is among the first local schools to grow produce in a rooftop farm (Boston University opened a small “secret” rooftop garden in 2009). But he and others believe urban agriculture is gaining traction.

One of Feinstein’s favorite aspects of the Brandeis garden is its impact on the campus community. Around 100 volunteers helped with the farm’s installation, he said, and the seven club officers all play different roles, ranging from farm manager to publicity coordinator. The faculty is always happy to assist, as well.

“I felt delighted to know that the community was behind our project,” said Annie Fortnow, a junior who is majoring in environmental studies as well as health: science, society, and policy and who serves as the club’s off-campus coordinator. “As we continue to advertise our farm and market, I think more students will want to learn about the benefits of the local food movement.”

For the club president, who spent nearly all of his free time last semester working on the project, seeing pictures posted on Facebook or the looks on his friends’ faces when they see the garden makes it all worth it.

“I’m astounded,” he said, after pruning some of the plants. “It was just a barren space before, and now we’ve turned it into something productive.”