At East Boston Y, little hands grow it and cook it 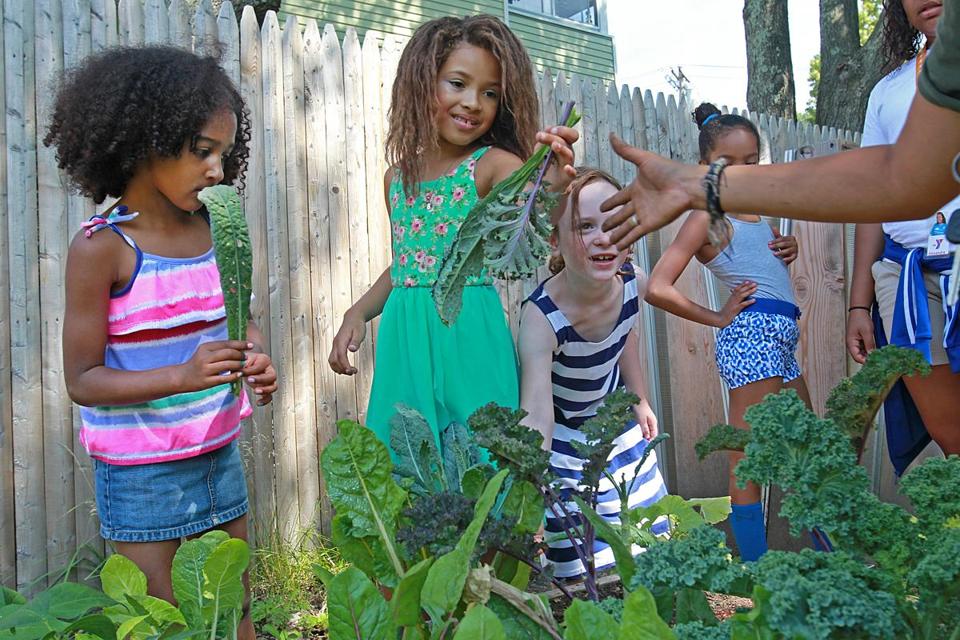 “It smells gorgeous,” announces Jacen Arbelo, 8, taking a whiff of the pesto he just helped make. Earlier in the morning, he picked the main ingredients, kale and basil, from a garden nearby. He sets to work on the next step, spreading pesto on tortillas and assembling them with other fresh vegetables. Beside him, Brandon Maldonado, also 8, takes a bite of the tortilla and gives the pesto an enthusiastic thumbs up.

The boys and eight other youngsters are students in the East Boston YMCA’s “Urban Farm to Kitchen” program, one of a range of healthy cooking classes offered throughout the year to residents of all ages. In 2013, the YMCA of Greater Boston formed a team of Y staff, board members, and East Boston residents to identify the neighborhood’s greatest needs. “They realized that there is a struggle going on with the community around access to healthy food, nutrition, and what we need to do to stay healthy,” says Meg Tallon, chef and community outreach director for the East Boston Y.
In the plan they developed, which is in its second summer, the group decided to build an urban garden and community kitchen in a former church rectory that the Y has been leasing for seven years. The East Boston Y’s main location is at a busy crossroads near the entrance to Logan Airport and the Sumner Tunnel. But the urban garden and the “Cooking for Life” teaching kitchen are nestled in a quieter residential neighborhood. Behind the rectory building are six raised garden beds that fill a small patch of green. The space is brimming with carrots, tomatoes, beans, peas, kale, garlic, and onions. And there are plenty of herbs: basil, chives, rosemary, mint, sorrel, and sage. Many of the children enrolled in the Y’s summer camp participate in the two-hour session, which consists of a gardening lesson and a cooking class.

Today, Leilani Mroczkowski, who comes every two weeks, is teaching the group about growing and harvesting food. As director of education for Somerville’s Green City Growers, Mroczkowski appeals to the children on various levels. During her hour, they have learned a host of green thumb wisdom: why sunflowers are hairy, what to do about the wild mushrooms found growing in the garden, how big the roots of a tomato plant are.

One activity this morning is “putting chocolate on your plants.” Mroczkowski describes how cocoa hulls will keep moisture in the soil and then, as they decompose, give the plants “a boost of nutrients, just like you need vitamins.” The scent of chocolate fills the garden as she takes the covers off two large buckets the children have helped carry from her truck. “It smells like chocolate, but it doesn’t taste like chocolate,” she warns them. The children grab handfuls of the hulls and distribute them throughout the garden.

A short composting lesson begins around a plastic tub filled with soil and live worms. The kids enthusiastically scoop up handfuls and examine the wriggling creatures. Mroczkowski tells them these are “red wigglers,” which are particularly good at eating plant material and “pooping it out as dirt,” and can turn a pound of compost into a pound of dirt in one day. The children look on, fascinated.

When it’s almost time to head into the kitchen, chef Tallon lets the group know that they’ll need kale for the recipe they’re making. “Kale is tricky to pick,” says Mroczkowski. “The leaves we want to pick are on the sides and bottom of these plants.” She shows them how to pull the bigger leaves down toward the ground until they make a snapping noise. A frenzy of harvesting results in a full bowl of leaves.

“What I really like about this program,” Mroczkowski says, “is that, in general, it [includes] kids who have limited exposure to the natural world. It expands their minds that food comes in all different shapes and colors, and that the food that is in the grocery store is just the surface level of what is out there in the world.”

Tallon gives the rest of her shopping list. “We’ll also need some peas, basil, and mint,” she says. Then they head to the kitchen.

Cooking is crucial to the gardening element, Mroczkowski says. “A lot of times for the schools we go into, we grow food for the salad garden and then their cafeteria staff prepares it. But Meg and her team are actually teaching kids how to cook,” she says.

The children’s parents are mostly first- or second-generation immigrants from South and Central America. “East Boston is one of the best neighborhoods to work in because we are working with people who have a great appreciation of bold flavor,” says Tallon, who develops recipes with this in mind, making sure that there are recognizable ingredients, then adding new elements. “We are always doing recipes that are familiar, but with a twist,” she says, which is why today’s tortillas are filled with the kale and basil pesto.

Tallon gives the students bare-minimum instructions. “They come in and within 10 minutes they’re cooking. We don’t want to do a lot of talking about nutrition. The classes are about being hands-on, and while we are eating we will review basic nutrition,” she says. She describes the four prepping stations for the recipe: slicing garlic, shelling peas, grating cheese, and chopping vegetables in a food processor (with supervision).

Within less than a minute, the children have formed small groups and are focusing on the tasks. Counselors stand by in case the kids need help, but it’s the little hands that are holding knives, splitting pea pods, and grating cheese. The prepped ingredients all go into an industrial-size food processor and after a few pulses, Tallon scrapes the bright green pesto into bowls.

“Who peeled these peas?” she asks. Three hands shoot up. “Thank you,” she says. “Now here’s what we are going to do with them.” Each student will take a tortilla, spread it with pesto, sprinkle with grated carrots and cheese, top that with fresh peas, and set it in a skillet. While they assemble their dish, the chef tells them recipe variations, depending on what they have at home. “You could try pesto with other greens . . . or different cheese.”

She takes a poll before they dig into their masterpieces. “Raise your hand if you’re trying something new today,” she says. From the 10 children, nine hands go up.

Gillian O’Callaghan can be reached at gillian.ocallaghan@globe.com.