How Far Does Your Food Travel? 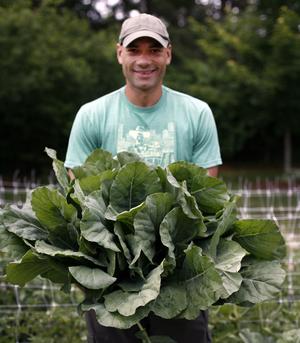 You don’t need to be a scientist to figure out that fresh food tastes better. There’s just no comparison between the robust flavor of a hand-picked cherry tomato, still warm from the sun, and the bland taste of a tomato grabbed from the stark, fluorescent aisle of a grocery store.

After all, when a plant comes from your backyard, as opposed to an industrial farm many miles away, the difference is evident in both taste and nutritional quality.

As Michael Pollan explains in The Omnivore’s Dilemma, an illuminating looking at our troubled food system, the average fruit or vegetable on an American’s plate travels roughly 1,500 miles to get there, and is “frequently better traveled and more worldly than its eater.”

All of those ‘food miles’ traveled and hours spent in transit – packed away on 18-wheeler trucks, trains, boats or airplanes – inevitably affect the quality of food, not just in terms of taste, but nutritional composition, too.

For example, a study conducted by Penn State showed that spinach loses much of it important nutrients after just eight days. Among the nutrients lost are folate, a vitamin B compound which produces and maintains cells in the body, and carotenoids, which help support vision and protect eyes from UV damage. Even if grocery store spinach looks fresh on the outside, it may often lack the essential vitamins and minerals that contribute to its healthful qualities. It’s not just the tick of time that has an effect on conventional, store-bought produce, but the growing methods, too.

One two-year study compared the nutritional quality and taste of organic versus conventional strawberries. It concluded that the organic variety had a longer shelf life and a far greater nutritional value than their non-organic counterparts.

As part of our education program in the Beverly School System, Green City Growers recently put together a video about food miles. It describes just how far most fruits and vegetables travel before they reach your plate, and how this can have detrimental effects on the environment, the nutritional quality, and taste of our food.

If you’re curious to learn more, you can watch the video here: