GCG Takes on an Orchard!

It’s tough to catch a spare minute with our farmers these days. Between spring awakenings and the planting in of the first round of crops, the last month or so was a farming frenzy. Take that doubly so for John Neri, one of our returning farmers this year. In addition to running a number of our corporate wellness programs, this year John has taken on the responsibility of managing an 85-tree fruit orchard in Sudbury. It’s Monday morning, and I am able to snag him for a few minutes to talk fruit before he heads out the door for the day.

So why fruit? How did you get into fruit management? 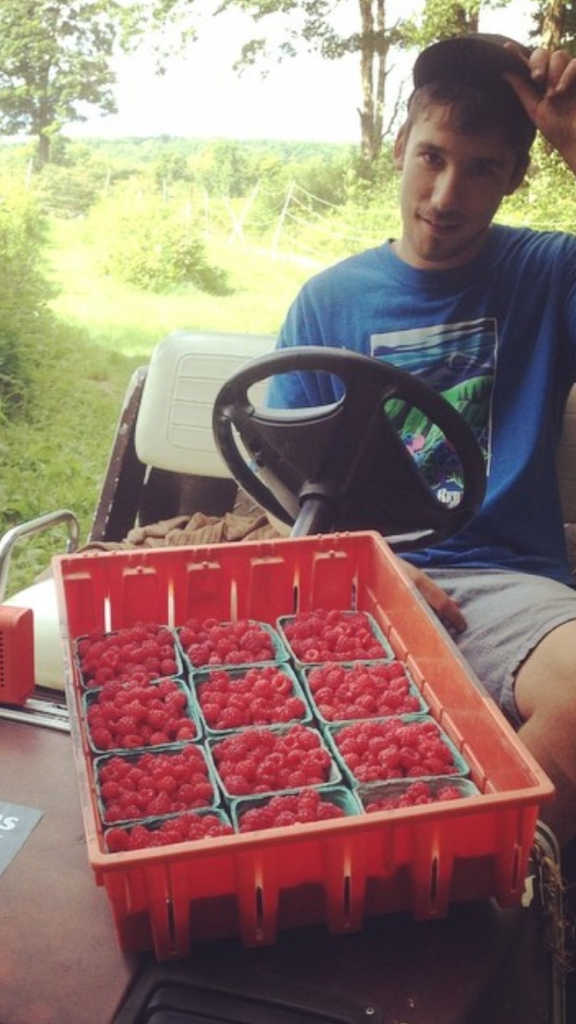 Well, after graduating, my girlfriend Mel and I had no real plans. We were both still looking for jobs, so we decided to go back to her parents’ berry farm, Monadnock Berries, in southern New Hampshire. We started working alongside them in the farm, and at the same time, they were managing an orchard for the Town of Westford. After a few months at the berry farm, Mel and I headed down to Westford and switched to working with tree fruit. We spent the rest of the season living in an RV at the back of the orchard.

The following season we came back to the berry farm, because we both had had a lot of fun with it, and took on management positions. I was working alongside Mel’s father a lot, apprenticing for him as he’d talk fruit with me for hours.

Since moving to Boston and starting working with Green City Growers last year, it’s been a fun little niche in the business. You see a lot of urban fruit growing, a lot of little backyard fruit trees and berry patches. People get really creative with where they’re growing fruit. I actually learned recently that, unlike vegetables, fruit trees don’t take up lead from the soil, so it’s this really viable, and still healthy, way of growing fresh produce in the city. 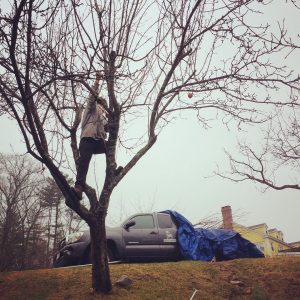 When did the orchard project come about?

The orchard came about last fall, and sprang from talks with Cliff, the owner of Orchard Hill. Chris, our sales guy, was talking with him about a raised bed garden program for seniors at the facility there, and the talks turned to how Cliff had planted about 85 apple trees fifteen years ago on this very beautiful part of the property – on a very nice manicured and landscaped lawn. Cliff had been looking for someone to manage the orchard, as it had been something like seven years since it had been properly managed. It was very overgrown and in need of a lot of work.

What you’ve done this year – what you will have to do in the coming months and years?

The brunt of the work is going to be this year, since we’re “renovating” the orchard and getting it to a more manageable state. In later years, we’re just going to have to do routine things – pest management, basic pruning, and fertilizing.

The first thing we did back in March was begin the pruning process. Like I said, the trees were very overgrown, which means there’s not enough sunlight or air flow. You prune to help the tree bud more so that you get more fruit. So we went in before the trees broke their dormancy with a crew of four or five of us, and we did a lot of work. 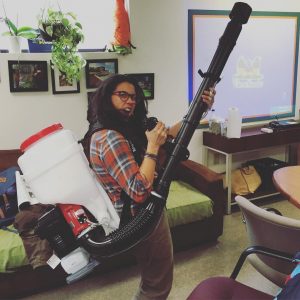 We’ve also been working a lot on the soil fertility, since it’s been mostly managed by professional tree services and landscapers that don’t specialize in fruit. Cliff had the landscape team chip up the mulch from the pruning and throw it under the trees – which is really good for the trees.

A few weeks ago, we did our first spray with our mist blower backpack sprayer – which I like to call the ghostbuster sprayer. As the trees start to open up and blossom, we’re going to have to start spraying for pests and diseases. Sulfur, kaolin clay – everything we use is organic. In the next few weeks, we’ll put out pheromone traps, which trap that the insects are attracted to them not the trees. This will help us to monitor what the specific problems in the orchards will be; this is called integrated pest management, which is what we do with our gardens as well, and it essentially means treating only the pest problems that exist in one specific location.

Over the next couple months, spraying, monitoring, thinning and harvesting. We’ll continually spray and monitor throughout August and September and October – harvesting various varieties as they ripen. 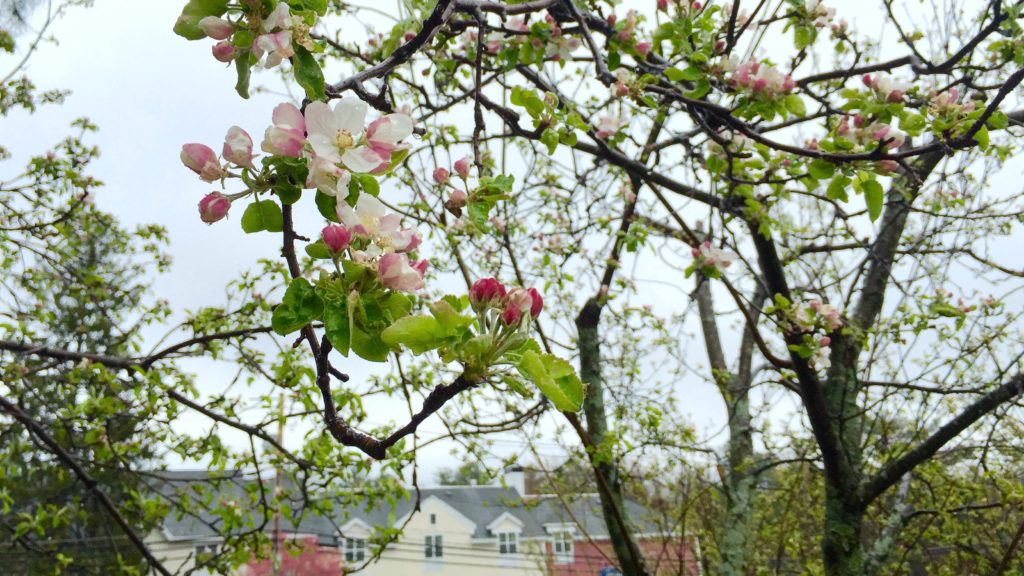 What excites you about the project? 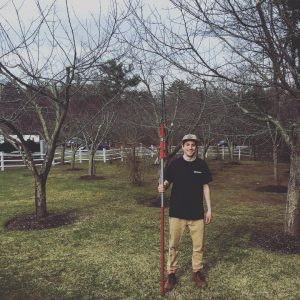 Orchard Hill is a really fascinating place. It’s a privately owned piece of property that has an assisted living facility and an early childhood development center. So you have all these different people who are engaged with the orchard, watching us prune and fertilize, and later harvest.

Every day I’m out there, it’s so apparent how visible it is. While I’m there working, there’s a lot of seniors just watching, and waving to me. And I think that a big part of why this project is so exciting, to me and to the people at Orchard Hill, is that the orchard community in New England is really strong. People think very fondly about orchards, about fruit. It’s a big thing for everyone in the fall, people get brought together. They’re distinctly, quintessentially New England.

So when I think about how last year this was an orchard where there were piles of rotten apples in the field, and how with our help we can find a use for the produce and fruit, that gets me really excited. Orchard Hill’s working on the best way to capture some of the value of the orchard, and the people living there get a new way to engage with the property.

What is your vision for fruit at GCG and beyond?

Green City Growers is a huge example of how urban agriculture is taking off, and I see a lot of potential for fruit in urban agriculture and in what GCG does. We’re already doing fruit installations, but there’s ways to espalier fruit, which means pruning them to special shapes. You can grow a pear tree in a way that it lies right against a wall and takes up very little space; sort of a fruit analogy to raised beds.

There are also so many varieties; you can grow large standard trees like we do at Orchard Hill, or small pots like we do out front. You can even grow crops like lemons and tangerines – I just saw that last week.

I think it would be cool if Fenway had more fruit beyond the strawberries we grow there. It’s awesome having them at the Boys and Girls Club. Fruit is just sort of scattered everywhere throughout the city, and I’d love to see even more of it!