The “Other” Presidential Garden 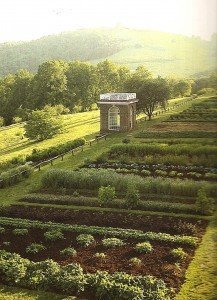 There has been a spike in public interest and media attention on home gardening since the release of Michelle Obama’s book, American Grown, in 2012, and her continued emphasis on healthy eating and gardening throughout the Obama administration.

But while Michelle Obama’s garden is buzzworthy current press, and the tales of World War II-era victory gardens are well known in the historical record, there is another garden of Presidential magnitude that is perhaps more impressive than both of these. Thomas Jefferson planted a vegetable garden at Monticello after finishing his terms as President. That garden, which is still thriving today, is absolutely incredible. Jefferson grew over 330 different varieties of vegetables on a backyard (side-yard) garden that spanned 80,000 square feet. This does not include his vineyard, orchards, or flower gardens. Today, the gardens are tended to by a full time staff who divide the harvests between the Monticello Cafe, employees, and local food banks. Peter Hatch, Monticello’s head gardener, has recently published a book about the garden called A Rich Spot of Earth.

Learn more about this mind boggling garden and the man behind it on Monticello.org, and more about A Rich Spot of Earth. Enjoy!