Green Roofs on Every Building?!

Two weeks ago, French parliament did something pretty awesome in the eyes of us here at Green City Growers. Per a report from the Agence France-Presse, on March 19, the French government passed a new law which requires all new buildings built in commercial zones have roofs that are at least partially covered by plants or solar panels.

Green roofs help to offset urban heat islands, the phenomenon of increased city temperatures due to decreased vegetation and increased pavement and buildings. Green roofs also retain rainwater, helping to reduce problems with runoff. Though the upfront costs of a green roof are greater than those of a conventional one, a green roof will, on average, save building owners about $200,000 over its lifetime. Findings from a Michigan State University research study state that nearly two-thirds of these savings come from decreased energy needs.

Because green roofs typically have a tough environment for plants – shallow depths of growing medium, limited water and nutrient availability, intense sunlight, and increased wind exposure – installers stick to plants like succulents and sedums, which thrive in such conditions. Flowering plants provide structural and visual diversity to the roof. 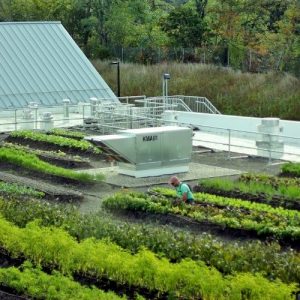 But, as we at Green City Growers know well, a green roof doesn’t have to mean succulents and flowers: a green roof can also mean a rooftop farm. Whether we’re growing at Ester restaurant in Dorchester, or maintaining the 17,000 square foot rooftop farm at Whole Foods Market Lynnfield, the GCG team is helping to push the boundaries of what’s possible up on the roof.