From the Jungle to the Ledge

Until about two days ago the yard outside of the Green City Growers office was getting very difficult to navigate. Looking out the office window, you were transported into a jungle of tomatoes, peppers, cucumbers and melons. Eggplants held their own in a bed, herbs poked their little leaves out of the fray, blueberry bushes calmly ripened their berries. The tomatoes and peppers were jumbled together: Black Prince next to Black Velvet, Yellow Brandiwine in between a Sun Cherry and a Jet Star, Commandment pepper squeezed beside a Jalepeno. There was nowhere to walk because the squash were in the path. The gate could barely open as the jungle inside, bursting with leaves and flowers hoping to turn into fruit, pushed its way outwards.

Then, the jungle moved to a farm. Well, much of the jungle. And the farm isn’t traditional. It’s rather small on the scale of farms. But it’s on a roof. This “farm” is the rooftop garden on a restaurant called the Ledge, in Dorchester. This installation is different than some of our other rooftop projects because we are working with green roofing engineers: instead of putting garden beds on the roof, the entire roof has become a garden.

When you step onto the roof, it appears that you are walking on mulch, but it is really recycled car tires that have been painted brown. Underneath are a few different materials designed to help with drainage. The garden beds themselves are much larger than our typical 4×4. There are four beds which stretch out across the roof, each containing two, or three, or more, mounds wide enough for two tomato plants to sit comfortably next to each other. The planting medium is a special lighter-weight soil mix that will allow the plants to grow while keeping the roof from collapsing under its weight. 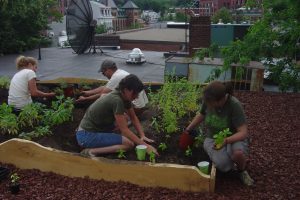 Yesterday we finished planting at the Ledge. The garden is filled with tomatoes, squash, eggplants, and herbs. After mapping out the crops, Marianna estimated that there might be over two hundred plants on the roof.

The jungle next to Green City Growers has moved. The space next to the office looks rather prim: the plants politely staying out of the paths, the vegetables respectfully giving each other room to breathe. On the roof, the newly planted vegetables have an exciting view: guests dining on the patio, cars moving on the street, and other, less attractive, roofs nearby which are, sadly, plant-less.