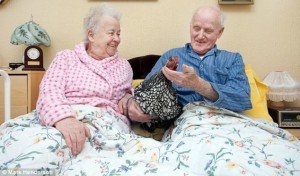 Next week, the Green City Growers team is installing Brookline’s first commercial chicken coop at the Olmstead Memory Support community at Goddard House Assisted Living. Since partnering with Khrysti Smyth and Yardbirds Backyard Chickens late last year, we’ve helped to provide these entertaining poultry-pets to a number of families throughout the Greater Boston area. The coop and six chickens at Goddard House, however, are something extra special.

We were already running garden education programing for the residents of Goddard House when the Community Partnership Director, Ginny Mazur, came across a Boston Globe article detailing the rehabilitative benefits of chickens. At the same time, residents at Goddard were asking about adding animals to their programming, and GCG had just announced our new chicken offerings. Talk about serendipity!

As the Globe article details, chickens make for wonderful companions for elderly residents, especially those with memory loss 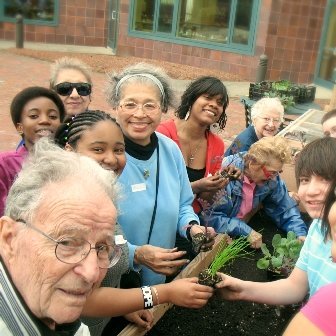 or dementia. Many of the residents of Goddard House, and indeed many seniors in general, grew up on farms or around animals. Terry Golson, who runs chicken-keeping workshops similar to those offered at GCG, recounts that for many residents, there is even a certain power to the tactile experience of holding an egg: “For those who used to do a lot of cooking or baking, having an egg in their hand can be very evocative. For one woman who grew up in Italy, holding the egg tapped into memories of making homemade pasta.”

It is our sincere hope that the chickens will affect the residents at Goddard House in much the same way as those residents described in the Globe. With outbursts of agitation quite frequent in patients with dementia, chickens allow for the calming presence one might associate with therapy dogs. Chicken therapy, however, is typically less structured, allowing residents to observe the animals throughout their day. 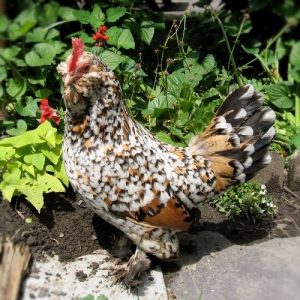