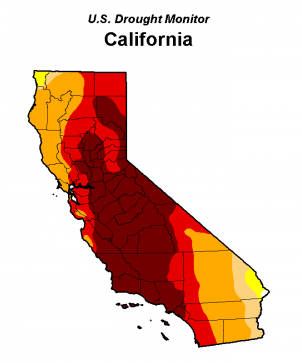 By now, you’ve likely heard about the so-called ‘megadrought’ in California, whose effects have prompted California Governor Jerry Brown to instate the first-ever guidelines mandating water reductions for urban centers. These guidelines will save an estimated 500 billion gallons of water between now and February, but with 80% of the state’s water supply going towards agriculture, these actions are only the first steps in building resilience to drought.

If, overnight, we lost all of California’s agricultural production to drought, what would our diet look? The short answer – expensive and grainy. California production accounts for the majority of American fruits, nuts, and vegetables – including 99% of all US-grown almonds and walnuts, 95% of garlic, and 71% of spinach. A lot of these products are incredibly water-intensive, too. A single walnut, for example, requires 4.9 gallons of water to reach maturity. Crops grown in the midwest, where farmers aren’t feeling the effect of drought, are largely staple crops like wheat, corn, and soybeans.

Californian farmers are taking steps to reduce water consumption, such as switching to more efficient drip irrigation systems rather than using conventional gravity fed irrigation or sprinklers. However, despite these efforts, the fact remains that California produces an incredibly large amount of incredibly water-dependent produce, and there just isn’t enough water to sustain these systems. We could all stop eating artichokes and tomatoes until this drought ends, but we also should take other steps to create more sustainable food systems.

Enter: urban farming. Here in Boston, we have no shortage of water. The localization of food production – especially of vegetables like tomatoes and lettuce which already thrive in the region, means that less water is necessary for growing crops where there isn’t any water to spare. Urban farms in Boston are certainly not supplying food at the scale of the mega-farms of California, nor are they growing year-round. But Green City Growers has grown over 110,000 pounds of produce on less than two acres since 2008, and we think that is a big next step. So, schedule a consultation today and begin securing your food supply by growing delicious and nutrient-dense food right in your own backyard.